How to recognize a LED light good or bad?

How to recognize a good LED light and choose the right one is a problem. 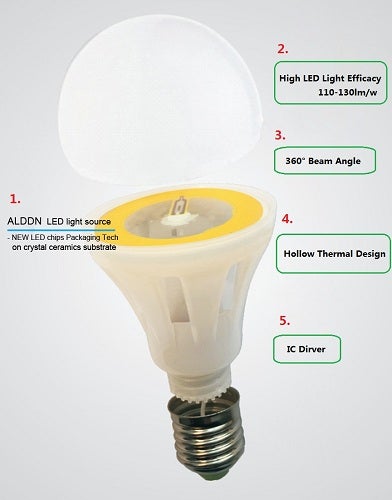 Here it goes:
1.Take the “material and structure of Heat sink” as reference.
The biggest threat of LED light is the heat. So a good heat sink with good material and good structure design will help much to protect the light.For example, Aluminous are widely used as the material due to it can conduct the heat very well. While some try to use the Aluminous & PC together as the material due to PC can spread the heat faster than Aluminous.
2.Take the “character of LEDs” as reference.
Dies/chips are made into LEDs after encapsulated and assembled.So the character of LEDs are decided by the chips and encapsulation technology.
3.Take the “Driver” as reference.
Compared with other components of a LED light,the Driver is with shorter lifespan. However,the lifespan of driver affected that of LED light so much. In theory,the LEDs can be with a lifespan of 50,000hrs—-100,000hrs,while the drivers just can be with 2,000hrs—35,000hrs.
Material and design are very important which decide the lifespan of drivers.
4.Take the “Luminous efficacy” as reference.
To the same LEDs, the higher luminous efficacy, the brighter.
To the same luminous output, the less power needed, more energy saved.
5.Take the ”Efficiency of driver” as reference.
Efficiency of driver means the power consumption by the driver. Higher efficiency means less power consumed by the driver and more power output for lighting.
6. Take the “PF” as reference.
A high PF means the driver & circuit are well designed.Which will make a LED light with long lifespan.
7.To find “whether they are qualified with standard of security ?”
Many countries have set up rules for the LED lights. Whether they are qualified with the certificates in your country is a symbol of the quality.
8.To find “whether they are assembled delicately ?”
Besides,whether the LED lights are assembled carefulness and delicately are very important.
A good LED light should have been assembled carefulness, tested a lot by different machines,under different conditions,just as high voltage attack,high temperature test,aging test etc.
In conclusion, a LED light is a whole or a team. Just like a basketball team. Regarding the driver as PG(point guard),LEDs as SF(small forwarder),Heat sink as CF(center forwarder) and so on.
If only the PG,SF plays well, they won’t win the game. If all of them plays well, they would be the champion. So that’s the point, if only each part of LED light performs well would make the LED light excellent.
Now the LED market is in a mass.
Prices competition is becoming more and more intense due to many unqualified products have involved in.
It’s known to us, the value of LED lights is energy saving, long lifespan, environment protection. We can not leave the initial value behind to pursue the business interest.
Quality comes first.
Share
Share on Facebook Tweet on Twitter Pin on Pinterest
Back to News